Services for Oil and Gas Industry

System in the field of efficient processing and data storage

Home//News and events//News//Supercomputer in Krasnoyarsk University - Open Technologies announced about the completion of the project of building a hybrid supercomputer for Krasnoyarsk State Pedagogical University. 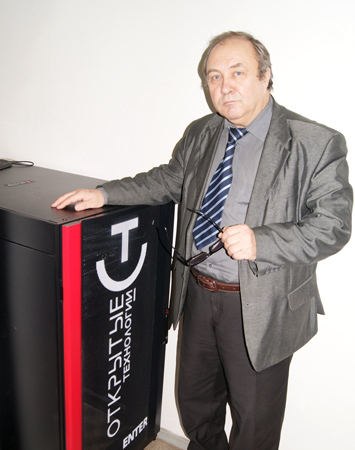 A decision on buying supercomputer was made by university administration within the program of strategic development. A high duty complex was necessary for educating students in CUDA technology and supporting a number of scientific researches. KSPU became the only educational facility, which managed to win the grant for financing the project.

The auction for building the computer system was won by Open Technologies. The system integrator managed to offer the best cost solution to the university, providing for solution of most of its educational and scientific solutions.

The contractor had to create a computer system that would correspond to the current university's requirements on the one part and on the other would avoid costly modernization of DPC supporting systems. The customer also found it important to have an option of further supercomputer development without altering the initial infrastructure and secure the contributed investment.

The system was based on standard hybrid supercomputer configuration ENTER 8/10 (Open Technologies' in-house development) with extended monitoring and management section. Such approach allows minimizing expenses and achieving better cost and terms of works.

During the project operations the specialists of Open Technologies adjusted basic solutions for optimal solution of the customer's task, commissioning planning, assembly and installation of hardware and software components, integration of supercomputer into the engineering and informational structure of the university.

"The solution offered by Open Technologies included us in a row of universities with their own supercomputers. The offered infrastructure will give us an opportunity of the most efficient application of supercomputer resources and carrying extension with minimal expenses, in a way that would be transparent for the system", said Valery Beloshapkin, director of strategic development program at P. V. Astafiev KSPU.

The availability of supercomputer will allow the university implementing multiple advantages of hybrid computer system. Given that the number program packages oriented at hybrid parallel systems is increasing in an avalanche way, as well as the share of algorithms effective for such systems, there is no doubt that the role the computer system for P. V. Astafiev KSPU as well as the share of its advantages will be on a rise.

According to Anton Pavlov, regional representative of Open Technologies in Krasnoyarsk, "the project demonstrates that a supercomputer can be bought at a reasonable price. We are always ready for cooperation and are going to develop supercomputer industry in the Siberian Federal District".

Technical details of the project:

The supercomputer of KSPU makes use of NVIDIA graphics processor providing for higher efficiency of the computer systems with insufficient rise of cost and energy consumption, as compared to central processors.

The computational nodes of supercomputer have high density construction with in-built Infiniband FDR controllers providing for a network of intermodal interaction with minimal setbacks and capability of up to Gbs. The computing section is based on independent NEXTIO vCORE Express 2075 graphic modules with the capacity of 4 GPU Tesla in 1U of the assembly volume.

The peculiarity of the solution is that its module construction of cluster hybrid computational nodes allows distinguishing between GPU and CPU life cycles securing their independent modernization and significant simplification of routine maintenance. The approach is also suitable for flexible and optimal distribution of heat sources within the wring closet and secures it effective transfer. This will be especially relevant, as soon as the number of computational nodes in the cluster grows.

Krasnoyarsk State Pedagogical University is the oldest university in Krasnoyarsk Territory, one of the leading pedagogical universities of Siberia and Far East. Krasnoyarsk State Pedagogical University differs from the other universities (mainly technical ones) by extremely varied forms and methods of education, training and student upbringing. At the moment the young people of the territory and the neighboring regions have at the disposal a wide range of university services including 51 programs of high professional education, 28 post-graduate programs, 17 retraining programs, 13 further training programs and 8 vocational programs. The university's structure includes 8 departments and 5 institutes (the Institute of Mathematics, Physics and IT, the Institute of Psychology, Education and Educational Management, I. Yarygin Institute of Physical Training, Sport and Health, Institute of Further Training and In-Service Education), 61 chairs. The university has a system of top-qualification teachers. The university's post-graduate system trains candidates of science in 28 fields, where 288 students are being trained at the moment. The doctoral candidacy is available in 2 fields: education and history with 5 dissertation councils. The scientific activity of the university encompasses 14 branches, some of them being innovative. 2000 specialists graduate from the university on annual basis. More detailed information about the university is available at http://www.kspu.ru